I am a conscious creator, a speaker, writer, filmmaker, editor, DP, music producer, engineer and composer. I have an insatiable appetite for creation and my goal is to “enlighten and educate with entertainment”.

I am certainly accustomed to working with popular celebrities and being part of the creative family. I recently mixed and mastered a #1 DVD and CD on Billboard charts for Guns N’ Roses (Universal). I recently have won several awards for a film named “Road to NowHere” which I shot, edited and created entirely on my own. In 2008, a song that I multi-track recorded and shot the live music video with India Arie at my private studio was nominated for a Grammy. I also contributed to the Peabody award winning documentary “For my country?” (Telemundo 2). A film that I edited, “Compassion Rising” with the Dalai Lama, debuted at the Parliament of Worlds Religions in Australia in 2010. In 2000, I moved to Los Angeles to develop my career in film and television production while still producing music.

I’ve contributed to many successful projects including music with Quincy Jones, India Arie, The Sex Pistols, Sublime, Tenacious D, Papa Roach, Usher, and Guns N’ Roses. I have worked on many films including, “Compassion Rising” (Dalai Lama), “What About Me” (1Giant Leap)/ specials “We Are The Future” (Quincy Jones), Eckhart Tolle/ Deepak Chopra Interviews/ television shows like “Tom Greene Show”(MTV), “Clone High”(MTV), “Sticky Cook” (Oprah), “Escapes” (NatGeo)… and many many others.

I was born and raised outside of Washington DC where I studied Advanced Physics, Computer Programming, and Engineering but find that my “mind” is not the only creator… my best creations come in the form of a balance of “mind and heart”.  By using intuitive creation, I tap into the stream of collective consciousness to enhance the “feeling” within the creation both in film and music.

I began my music career in Nashville at many legendary recording studios including Emerald, Sound Stage, Masterfonics, Sixteenth Avenue Sound, Secret Sound, Criteria (Miami), Power Station (NY) and Electric Lady Land Recording Studios. I developed my craft of producing, recording and mixing by working alongside some of the best and brightest producers and engineers in the business including Roger Nicols, Tom Lord-Alge, Dallas Austin, Peter Collins, Bob Clearmountain and Quincy Jones. 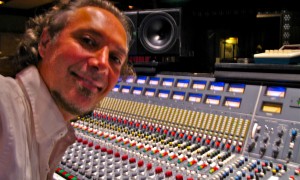 In the 1998, I expanded my skills to also include video, film and writing by helping to create and record the show Sifl-n-Olly for MTV networks. 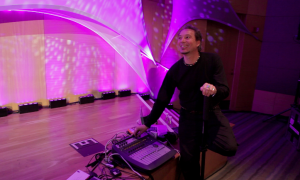 I am excited about creating media that inspires us to bring our open mind and heart together in harmony.