Guns and Roses “Appetite For Democracy” 3D DVD and CD

Guns and Roses “Appetite For Democracy” 3D DVD and CD 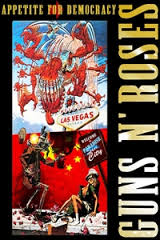 Appetite for Democracy  3D is a live concert film to be released in Cinemas, Broadcast and DVD by Guns N’ Roses, filmed live at The Joint at the Hard Rock Casino in Las Vegas on November 21, 2012. The show was filmed entirely in 3D and was produced by Barry Summers from Rock Fuel Media.

#1 in DVD sales on the Billbord Charts and Amazon for Summer 2014.